Tribute to our Military 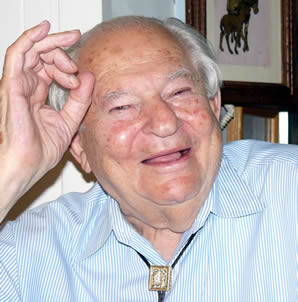 Almost everyone in this country has an Uncle Harry, either alive or who has passed on.  Harry was a World War II Veteran who helped save the world from Hitler and his band of butchers.  Sadly, many of our WWII veterans are dying and as the title of Tom Brokaw's book describes them, "The Greatest Generation", is almost gone from this earth.

While it is estimated that only 558,000 men and woman of the total 16 million WWII people who served are still alive (at the end of 2017), it is also estimated that 362 die every day.  At that rate, they will mostly all be gone in 4-5 years.  However, you've got to know that as every year passes, that rate will increase drastically.  Our Uncle Harry passed on February 24th, 2008 at the age of 98.  I used to speak to him every day and he was sharper than a lot of people 20 years younger up until the day he died.  My dad, Gerry Gould, also a WWII Veteran, died on March 12, 2014 at the age of 89.

I can't imagine this world without our WWII veterans. While WWII is only pages in history books for most baby boomers and younger, those in "The Greatest Generation" represent a type of America and a time that may be lost forever. After the war, that generation made it in this world through hard work and sacrifice.  No matter what race, religion, sex, or economic class they were from, they were just different than the generations to follow. My life's experiences can't even begin to compare to that of Uncle Harry and my father Gerry.  The Depression and WWII were enough for one person to endure in a lifetime. All that we have today is due to the sacrifice the WWII veterans paid.  Many believe that the world was almost lost to the Nazi’s but the US and her allies finally defeated them.

The music of the day was Frank Sinatra, Nat King Cole, Louie Armstrong, and Dean Martin to name a few.  Great movies coming out of those times were: Mr. Smith Goes to Washington (1937); Casablanca (1943); It's a Wonderful Life (1947), and Singin' in the Rain (1952). It was a different time, with different values, and a different mindset.

But this webpage isn't just in celebration of "Our Uncle Harry", it is in celebration of every Uncle Harry, and all veterans who served in our US Military.  Whether you were for or against any of our wars, the reality is that all these men and woman, some who volunteered, many who were drafted, put their lives on the line for you and me.  No one "wants" war but when called to duty, these people went on our behalf.  It is important to note that the Desert Storm and Iraq Wars were made up of and still is an all-volunteer military.  It is a shame that through all the political battles between Republicans and Democrats, War Supporters and Anti War Demonstrators, the heroism of our Veterans is somehow often lost by some in this country.

I think the time has come to:

Having spent 25+ years in medical sales and management, I was always disheartened at the level of care we give our veterans. In my opinion, the Veterans of this country disserve the best care this country has and the goal of this website will be to raise money for that cause.

Harry was the son of Nathan Roodman and Dunya (Dena) Roodman who were from the Ukraine and who were the grandparents of my father Gerry. They were married for 60 years. Nathan was drafted into the Russian Army and because he was a jeweler prior to being drafted, he was able to design a hair trigger for his rifle, which allowed him, interestingly enough, to win a sharp shooter contest. He escaped from the Army and Russia, coming to America with Dunya in 1905. Harry was born on December 30, 1909.

He was trained at Camp Gruber, Oklahoma, home of the 42nd Rainbow Division.  He spent 11 months training in jungle warfare.  He was supposed to originally go to the Pacific Theatre.  Things became very intense in France and instead he became a replacement replacing replacements.  Eisenhower needed as many men as he could get for the invasion of Normandy.  They shipped all the trained infantry men and made one big shipment of them to the White Cliffs of England.  These were going to be the first replacements of those who were killed or wounded in the first wave of men who hit the Omaha Beach.

They weren't told anything.  He ended up on a boat crossing the English Channel.  They landed on Omaha Beach and put in a staging area.  They were not part of the first few waves who landed and met their terrible slaughter.  By the time Harry landed, the Germans had been pushed back after thousands died obtaining the first objective.  Some may think he had it easy but read on.

Luckily, he was not in this first wave but landed on Omaha Beach and was held in a staging area.  Sadly, there was no staging area for those first waves who came in and so many died.  As the first waves broke through the German line, they sent Harry and the rest of the men up and over the hill.

Harry became a part of the 83rd Infantry Division as a replacement.  He fought in the Battle of St. Lo in the hedgerow.  They would move up from one hedgerow to the next and lived in foxholes around the perimeter.

One night, things had finally calmed down and Harry had dug a foxhole under a tree.  It was the only tree in the area of that hedgerow.  The shells were so sensitive that even a leaf of a tree could set them off.  The Germans hit the tree with a mortar and knocked Harry unconscious.  One might say that the tree caused him to be hit; another might say the tree saved his life.

He was unconscious for about 12 hours as he said that he happened to look at his watch.  He woke up hours later covered in debris and mud everywhere.  His platoon leader saw the shape he was in and sent him back one hedgerow to the aid station.  He had a 104 degree fever and was pretty beat up.  The doctor sent him back to his foxhole with some blue pills in hand.  Other platoon members told him "Harry, don't take the blue pills.  You'll fall asleep and if the position is overrun the Germans will capture you." So he didn't take the pills and became increasingly ill.

He became so sick and delirious, the next morning he was sent back to the aid station.  The doctor had left but he left a message that if Rodman came back still with a fever to get him out of there.   So they sent him back with the walking wounded.  He doesn't remember much after that but ended up somehow at the airstrip on the beach.  They flew him to Swindon, England to recover.   He had pneumonia and other things going on. Guys on the other beds told him he should get the purple heart.  He didn't care about that stuff.  In fact he was supposed to get one but never pushed for it.

He almost died of pneumonia - in fact, his wife Adel, received a letter saying he had died.  He fought back and when they handed him a mop, he knew he was getting better.  In total, he was in the heat of battle for about 2 weeks.

He was reclassified as an MP in the 707 MP battalion.  He was used to replace other MP's and spent the rest of the military time as an MP.  He ended up going back across the channel to Antwerp, Belgium on Thanksgiving Day in 1944.  Eisenhower promised everyone a Thanksgiving Dinner.  During that dinner, the captured German soldiers served the soldiers and he'll never forget that.

Just before the Battle of the Bulge, Harry was in Antwerp, about 35-40 miles outside the Battle.  During the Night of the Breakthrough, the Germans took advantage of a big fog and began bombing Antwerp as well, because they knew supplies were coming in there.  They almost broke through and would have taken the initiative again.

Finally, the Allies turned the Battle of the Bulge and things settled down.  He was in Antwerp until the end of the war.  He was supposed to be shipped to the Pacific but the war ended.  He went back to New York, picked up his life and restarted his business - trying to forget about the whole thing. 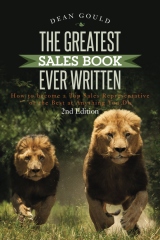 Are you interested in becoming the best you can?  This book  gives you edge to sell yourself to others in a professional way that communicates your message so that you are effective - either in a business environment or social.

Dean Gould's book, "The Greatest Sales Book Ever Written" is full of ideas to sell yourself as you have never thought before.  This is just not a sales book, but a book that helps you communicate with others effectively.  Try this sales book - you will benefit from it.

30% of profits go for research
to find cures for cancer